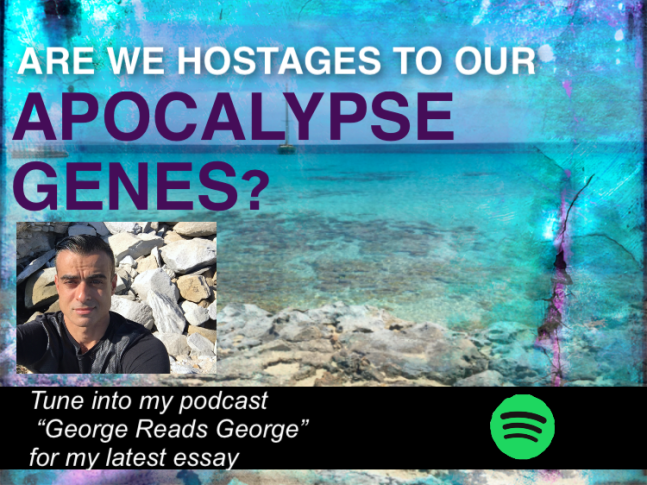 As a former molecular biologist and microbiologist, I happen to know a thing or two about numbers, evolution, and exponential phenomena. Nature is full of the latter. I spent three years of my life growing bacteria every day, in order to study their growth rates and survival mechanisms. I experimented with different conditions, including temperature extremes, acidity, and starvation. One of the things that I discovered was that even under sub-optimal conditions, bacteria, and as it turns out, most other life forms, still want to continue to grow their population exponentially — even in the face of adversity and existential crisis. Some plant and animal species even enter a “last ditch to procreate” period, that can only be described as a suicidal breeding frenzy given the fact that the resources around them are actually disappearing.

So why do organisms exhibit this seemingly self-destructive behaviour? Undoubtedly, there must be a rational basis for this bizarre apocalyptic procreation behaviour, for it to have been given the stamp of approval by evolution. It is actually a well-documented, normal biological response. It appears to be encoded in survival genes, which, once activated under stress conditions, set off a cascade of hormonal and physiological responses that dictate self-destruction as well as procreation, at the same time. And if you think about it, it makes sense from the point of view of organisms rushing to spend the very last reserves of their energy into the most useful thing that they can possibly do: ensuring that they have left behind as many progeny as possible while the ship is going down, so that the species can survive.

However, this strategy does carry a risk: it falsely assumes that there will be a world for the progeny to thrive in. For some of these organisms, the processes of procreation and system shut down have been merged to cater for this risk, aiming to leave behind progeny that will not immediately grow but who are able to wait, almost as long as it takes, until conditions are more favourable. Extremophile bacteria produce Noah’s Ark-type impenetrable capsules called spores, which allow them to enter a dormancy period. A more familiar example is that of plants: they leave behind seeds that can last for hundreds of years until the rain or other favourable conditions return. However, it is questionable whether these survival methods are built specifically to stand a test of time as significant as that of a major climate change. And although it is likely that bacterial spores may survive our climate apocalypse, human survival is nothing but science fiction.

Hollywood has explored the concept of human dormancy in sci-fi movies involving interstellar travel in the form of cryopreservation chambers — those funny cocoons we often see that resemble solariums, and which have been replayed back to us again and again on TV so many times to the point that we almost believe they exist. A person wakes up after their two-year nap, opens their coffin, has a bit of a stretch and realises they’ve arrived at a new solar system. However, this idea has remained, and will probably remain forever a fantasy theme restricted to the science fiction industry. Freezing humans and preserving them until after climate change, when the Earth cools back down to habitable levels again, sounds like an incredibly futile and hopeless idea only Elon Musk would pursue, not to mention arrogant given that we should be concentrating on saving the planet and its other 8 million species first, so that we don’t have to put ourselves in cryogenic capsules.

So is our civilisation destined to follow this exponential growth, until it reaches a spectacular collapse? Are we hostages to our Apocalypse Genes? Luckily, ecosystems have evolved in such a way that one species’ exponential growth is limited by another species, competing for the same resources. Our ecosystems and the population of each species may appear static, but they are in fact dynamically balanced by each other. They all have the potential to become exponentially self-destructive. They don’t, simply because they are engaged in a perpetual “battle of the curves”, something I have explored previously in my writings. The various population curves tend to flatten each other out, much like the current battle between the human population curve, and the COVID-19 virus curve. The trouble is, that humanity has long ago uncoupled itself from the restraints, and the safety net of the ecosystem. By becoming a parasitic species, it is following a similar exponential curve to that of a virus, and which always results in a spectacular collapse. As our consumption, natural destruction, population, and the resulting climate system breakdown continue to accelerate exponentially, we will most certainly reach a very sudden change in our trajectory.

Our Apocalypse Gene is the parapet that hides the grim future that we are unable to see. Our cognitive fault here, is simply being unable to recognise and understand the concept of exponentiality that is inherrent in all life forms. Whether we are bacterial cells or advanced beings, we follow the growth path of an embryo. First, there was one fertilised cell. Then 2, 4, 8, 16, 32. Our civilisation is running the risk of a prematurely terminated pregnancy.

(from the book Disposable Earth)

5 thoughts on “Are we Hostages to our Apocalypse Gene?”