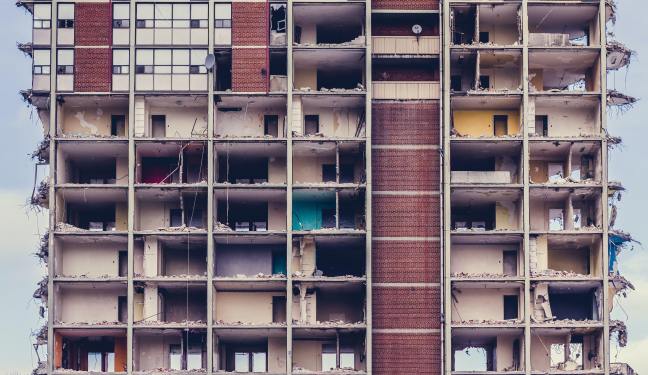 But sometimes adding on to the existing DNA code is not nearly enough to adapt.  Sometimes evolution cannot catch up with environmental changes.  The only way to “adapt” in this case is to start over the process of life itself.  There was a real and present danger that life on the planet could be reduced to just a few species.  It was time for the EoT to concentrate on those species who were most likely to make it: whether they were a few bacteria, a semi-intact ecosystem that had weathered the storm in a secluded niche somewhere, or even a developed civilization.  As long as the garden had not been poisoned and there was still some space in it, there was hope that someone, something, somewhere, could still grow.

The likelihood that Humans would remain important players in this New Earth was looking increasingly slim.  A walk down the old waterfront was enough to convince anyone who still believed otherwise.  Buildings stood in silence like pale grey ghosts, as John started his evening walk at the main intersection where the city center used to meet the waterfront.  This crossing used to be a bustling beehive, with thousands of people buzzing about, whether it was for work or pleasure.  Some of the windows on the buildings were still left boarded up, most others smashed, sucked out by the hurricane as if a voracious glass-eating monster had roamed the streets looking for windows to eat.  Staring inside each window was like staring into a black hole:  each one had the same pitch-black darkness, the same cold stare one experiences when they look into the empty eye sockets of a skull.  The gutted-out windows of the city were now portals to a new dimension: each one of them a doorway to the infinite empty space that surrounds the planet.  Without the people and city lights, Earth on the ground looked increasingly desolate, like the lonely rock floating in space that it truly is.

He walked further down along the beachfront where all the game arcades used to be.  Bumper cars and other rides looked like they had been abandoned mid-game, as if people were running to escape from the big glass-eating monster.   Almost none of the debris that Julia had left behind was cleared up.  There were bricks in the middle of the street, trees split in half over trucks.  It seemed that, after so many category six storms, people had finally unanimously decided that this was the last draw.  You can have it all, Julia.  Our little arcade. Our beachfront.  Our offices and restaurants.  It’s all yours, forever.  We’re done with this place.

It was good to see that the seagulls had made good use of the immobilized Ferris wheel.  Each compartment had been turned into a luxury sea view condo for young couples with chicks.  The otherwise eerie silence was disturbed by two seagull families fighting viciously over one of the prime spots towards the top of the wheel.  A seal popped its head out of a yacht that was sitting in the middle of the burned-out lawn.  It observed the dispute for a bit, before getting bored and lying down again. John walked on.

Over in the far distance and towards the main beach, John recognized a familiar skyline:  the group of tower blocks that were his old neighborhood, protruding into the sky as they would on any other normal day: they looked like normal buildings, even though John knew that as a matter of fact they were corpses.  This was a no-go area, still flooded and officially declared a permanent uninhabitable erosion zone by the city.  John could only really visit his old neighborhood by boat and, assuming that he managed to get there, he wouldn’t know where to even start in terms of beginning to contemplate salvaging some of his moldy belongings out of his old flat.  Besides, drones patrolled the area regularly for looters, not to mention the looters themselves, who had squatted some of the 3rd and 4th floor dwellings, becoming modern “boat people” who lived off scavenging and fishing in the now flooded main boulevard.