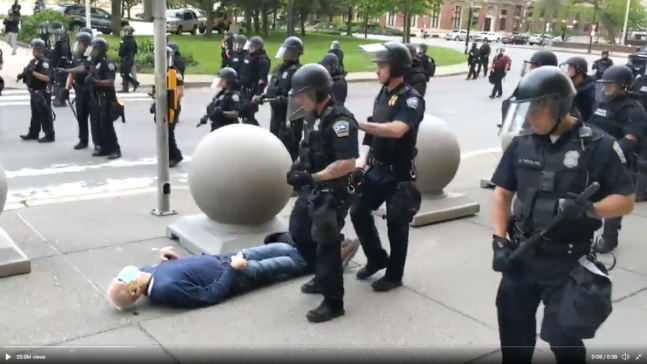 We have reached a dangerous point in our history. We have reached a point where it will be easier to program compassion into a robot than to “re-program” compassion into our police force, and into the rest of us. The Robocop age is becoming a distinct possibility, with everything that this means for where we have arrived to as a human race. Yearly surveys conducted by city authorities in the future will confirm this, in order to reassure the citizens: “new survey finds that robot police forces continue to be more effective and more compassionate than real, human police officers”.

It was only a matter of time before we got to this place. Because as long as we continue to treat other life forms on this planet as products, protesters will continue to be treated like ducks in a shooting range: plastic, and lifeless. Everything in our capitalist civilisation follows the productisation route, which is to turn everything, whether it is a piece of food or a human being, into something that can be bought or sold. If something in our society is not “sellable”, or doesn’t get any monetizable “air time”, then it is absolutely useless. Things such as dignity, compassion, equality, healthcare, environmentalism, are red alerts for our system: they are loss-making, extremely risky areas for our capitalist society to “invest” in. They only become profitable when hijacked to be used as temporary, fake facades for political campaigns or clever product marketing, so that they can appeal to whatever humanity we have left in us. We have all become experts in this by now, whichever level of society we belong to. Governments, brands, sometimes even charities, have learned to play the “equality” card very well, whenever they need something in return.

The new digital economy has accelerated our transformation into emotionless automatons. While Google and Facebook have turned us into products ourselves, whose data can be bought, sold, influenced and exploited, we in turn have become exploiters ourselves: our digital society has habituated us to treat other human beings as pages that we scroll through. To see other life forms on the planet on a purely transactional basis: as items on our “want” list, as opposed to independent entities with their own right and wants. And to treat protesters as objects in a video game obstacle course.

The state of the police force is only a reflection of the state of humanity.

George is an Author, Biologist, Chemist and Food Scientist. You can follow him on Twitter @99blackbaloons , read his books or join his blog by clicking Follow at the bottom of this page

One thought on “The Productisation of Existence”